What is a smoke detector? 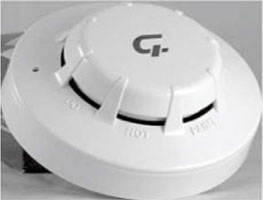 A smoke detector is a device that senses smoke,  typically as an indicator of fire. Commercial and  residential security devices issue a signal to a fire alarm  control panel as part of a fire alarm system, while  household detectors, known as smoke alarms,  generally issue a local audible or visual alarm from the  detector itself. Whenever a smoke is detected which  will be noticed by the central panel board and it will  start ringing all the sounders in the building. By this  everyone in the building will be alerted and evacuate  the place safely before any casualties can occur and  the rescue team can reach out to the point of fire  detected and contain it from spreading around. 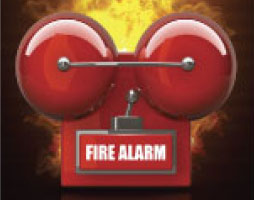 In the United States, fire alarm evacuation signals generally consist of a standardized audible tone, with visual notification in all public and common use areas. Emergency signals are intended to be distinct and  understandable to avoid confusion with other signals. 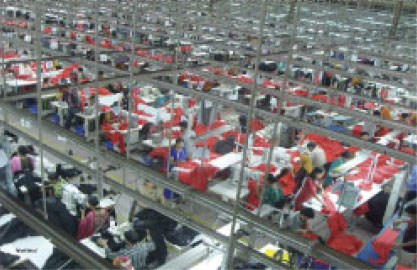 Readymade garments are the largest export sector in Bangladesh, with more than 78% of the country’s total foreign earnings generated from this sector. Bangladesh is also the second largest apparel exporter in the world. Since this is a highly labor intensive industry (hence Bangladesh’s competitive advantage through its abundant supply of unskilled cheap labor) the sector is also the largest industrial employer in the country with around 3.6 million people directly  working in these factories. Unfortunately, given the  labor intensive nature of the industry, the density of  workers on factory floors is very high. This high  density of workers results in a large number of  injuries and fatalities in the event of an accident.  However given the lack of a safety culture in the  country in general, cost-cutting measures often  affect the health and safety of the workers. Clothing  is easily flammable and as such fire is one of the most  frequent and damage inducing accidents in these  factories in Bangladesh. Fire is also purported to be  the largest cause of on-the-job injuries and fatalities  in this sector. Each new incident of fire and related  damage adversely affects the reputation of the industry abroad, especially since the working conditions in the manufacturing sectors in the developing countries is a general cause of concern in many developed countries. Given the importance of fire safety in the garment sector, there have been concerted efforts from the government and the international buyers of the apparel products, to improve the fire safety culture and this has indeed reduced the fire incidents and losses significantly. The way fire alarm system helps Garment Company is early warning of fire is achieved through automatic fire alarm systems. Fire alarms can be initiated automatically by smoke detectors or heat detectors, or manually by call points. The alarm then sounds by means of bells or horns in order to notify the occupants to evacuate the building. This major feature of an alarm system drastically decreases life loss of innumerable workers along with any loss of finance. After finding the starting point of the smoke through the central panel board, the fire can be contained. In case of less shouldering fire which can’t be detected by the smoke detector by any chance, is detected by any employee in the building, he/she can alert the building rescue just by breaking the manual call point. Such a scenario is applicable in all sorts of factories, office, big commercial buildings, schools and hospitals.

It’s not highly likely that fire will only break out at factories and other places, it might break out even from one’s house Most terrifying situation can be an emerging fire in deep midnight overleaping everyone’ attention. So stand alone detectors are also preferred in household purposes so that everyone can head towards a good night’s sleep. We can consider the tragedy of Japan – Bangladesh City apartment building which occurred more than a year ago. Due to lack of safety measures, many people were burnt alive of one family, most disheartening part was where it was shown family members held against each other and were slowly burnt which was later evident by their dead bodies. We don’t want another Japan-Bangladesh tragedy.  Let’s come together and standup against fire to cease it as much as possible.